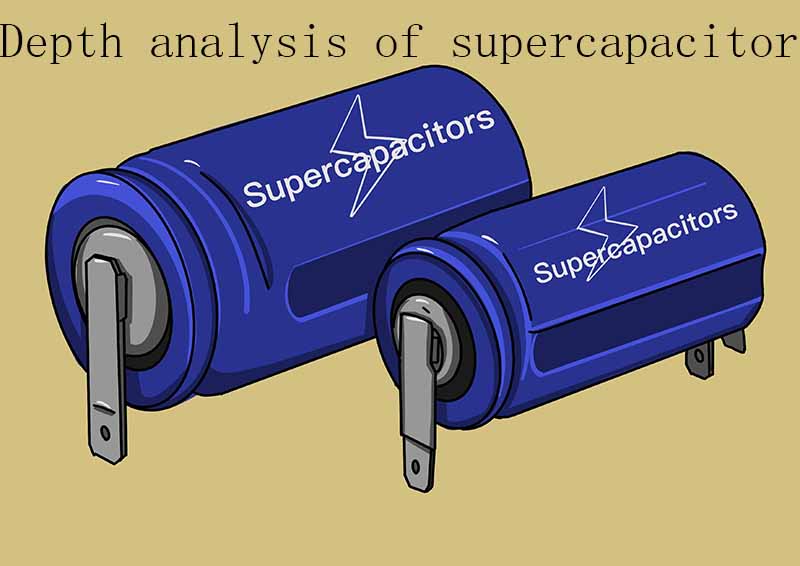 The energy storage mechanism of supercapacitor was discovered by Helmholz in 1879. In 1947, Graham et al. First began to study the electrocapillary phenomenon of mercury. In 1957, Becker first proposed that smaller capacitors can be used as energy storage devices, which have an energy density close to that of batteries. Subsequently, standard oil company (SOHIO) realized the great utilization value of electric double-layer capacitor on the surface of graphite electrode in the research and development of fuel cell. In 1962, the company produced a capacitor with working voltage of 6V and carbon material as electrode, which is about the same size as the size of automobile accumulator. The capacitor can drive the boat on the lake for about 10 minutes. Later, the technology of standard oil company was transferred to NEC electric company of Japan. NEC company began to produce “super capaci tor” brand high-capacity electric responder in 1979, which is the origin of the name of “super capacitor”, and applied the technology to the battery starting system of electric vehicles, starting the large-scale commercial application of super capacitor. NEC also applies super capacitor technology to the battery starting system of electric vehicles, trying to develop large-scale commercial applications of electrochemical capacitors. At the same time, Panasonic designed “goldca pacitor” with activated carbon as electrode material and organic solution as electrolyte. This is also the origin of the name “gold capacitor”.

The attempt to use transition metal oxide or nitride as the active material of supercapacitor electrode began in the 1970s. The oxide electrode of nail metal was used as the electrode material of “ultracapacitor”. In 1990, giner introduced ruox / carbon / Nafion capacitors.

There are many types of supercapacitors, which can be divided into a variety of products in different ways.

1.1 classification according to the mechanism of electrochemical capacitor storing electric energy

(1) Plate type supercapacitors mostly use plate-shaped and disc-shaped electrodes in the button system. In addition, there are high-voltage supercapacitors composed of multi-layer laminations in series, which are typical products of economic company, and can reach the working voltage of more than 300V.

1) Aqueous electrolytes include the following categories:

Alkaline electrolyte usually uses Koh, NaOH and other strong bases as electrolyte and water as solvent.

Neutral electrolyte usually uses salts such as KCl and NaCl as electrolyte and water as solvent. It is mostly used in the electrolyte of manganese oxide electrode materials.

As a kind of energy device, supercapacitor has a similar structure to electrolytic capacitor, including electrode active material, collector, electrolyte, diaphragm and outer packaging.

In the structure of internal multi parallel high-capacity capacitors, laminated structure is common. Supercapacitor is a new energy storage device different from battery and traditional physical capacitor. Because its essential principle is still the capacitance principle, in order to make the capacitance of super capacitor reach farad level or even tens of thousands of farads, it is necessary to make the effective surface area of the plates as large as possible and the distance between the plates as small as possible. The core factor affecting the performance of supercapacitors is electrode materials. There are several commonly used electrode materials as follows.

Carbon fiber electrode material adopts activated carbon fiber forming materials, such as cloth and felt, which are reinforced and sprayed or molten metal to enhance its conductivity.

Supercapacitor is a kind of capacitor with a capacitance of thousands of farads. According to the principle of capacitor, the capacitance depends on the distance between electrodes and the electrode surface area. In order to obtain such a large capacitance, supercapacitor reduces the distance between electrodes and increases the electrode surface area as much as possible. Therefore, the principle of electric double layer and activated carbon porous electrode are adopted. The principle is to rely on the electric double layer at the solid-liquid interface to store charge.

A pair of solid electrodes are immersed in the electrolyte solution. When the electrode is in contact with the electrolyte, due to the action of Coulomb force, intermolecular force or interatomic force, there are two stable and opposite charges at the solid-liquid interface, which is called interface double electric layer. The electric double layer capacitance is related to the electrode potential and surface area. The electrode of electric double-layer capacitor is usually composed of porous carbon material with high specific surface area. Carbon materials have excellent thermal and electrical conductivity, low density, good chemical corrosion resistance and low coefficient of thermal expansion. They can be prepared in various forms such as powder, particle, block, fiber, cloth and felt by different methods.

In the Faraday charge transfer process, when some metals (Pb, Bi, Cu) undergo single-layer under potential deposition on Pt or Au or redox reaction of porous transition metal oxides (such as RuO2 and IrO2), the discharge and charging process has the following phenomena: the potential of the two electrodes is almost linear with the charge applied or released on the electrode.

If the system voltage changes linearly with time, an almost constant current is generated. This process is highly reversible and has the characteristics of capacitance, but it is different from the formation process of interface electric double-layer capacitance. The reaction is accompanied by charge transfer and redox reaction, so as to realize the storage of charge and energy. For example, the capacitance of a supercapacitor with RuO2 as electrode and H2SO4 as solution mainly depends on the waist capacitance. It is considered that Faraday reaction occurs in the micropores of RuO2, and the equation is RuO2 + XH + + XE – → RuO2 · x (OH) x waist capacitance occurs not only on the surface of noble metal oxide electrode, but also inside the electrode. Therefore, higher capacitance and energy density can be obtained than electric double-layer capacitance.

The metal oxide supercapacitor initially studied mainly uses RuO2 as the electrode material. Because the conductivity of RuO2 is two orders of magnitude larger than that of carbon and is stable in sulfuric acid solution, its performance is better than that of electric double-layer capacitor. The current research focuses on the preparation of RuO2 with high specific surface area by different methods. The electrode materials are mainly thermal decomposition, sol-gel method and so on. It has been reported that the maximum specific capacity of RuO2 electrode is 1000F / g.

Because of its high price, in order to reduce the cost, some researchers are exploring other metal oxides to replace or partially replace RuO2 as electrode materials.

Conductive polymer supercapacitor is to quickly produce n-type or p-type doping on the polymer film through the oxidation and reduction reaction of conductive polymer in the process of charge and discharge, so that the polymer can store high-density charge, which is also a waist capacitor. The specific capacity of polymer capacitor is 2-3 times larger than that of electric double-layer capacitor with activated carbon as electrode material. Among them, the representative polymers are polypyrrole, polythiophene, polyaniline, polybenzobenzene, poly-p-benzene, etc.

Supercapacitors can also use different electrode materials at both poles. For example, one pole is carbon material forming electric double-layer capacitance, and the other pole is financial oxide electrode using inertial capacitance to store energy. On the basis of keeping the voltage unchanged or slightly increasing, the specific energy of metal oxide supercapacitor is 4 times higher than that of double charge layer supercapacitor by using the effective ratio of super specific energy of metal oxide supercapacitor and double charge layer supercapacitor. When working, this kind of capacitor not only has the contribution of electric double-layer capacitance, but also includes the role of quasi capacitance. Therefore, its specific energy is greatly higher than that of simple electric double-layer capacitor. At the same time, it can have higher specific power and cycle life. According to different service conditions, the times of charge and discharge can reach 120000 times, or even 500000 times.

At present, the performance indicators of supercapacitors are described as follows:

(1) Rated capacity refers to the product of the time required to discharge to the terminal voltage of zero under the specified constant current discharge condition and the current divided by the rated voltage value, with the unit of F.

(3) Rated current refers to the current discharged to 1 / 2 of the rated voltage within 5S, in a.

(4) Maximum stored energy refers to the energy released by discharging to zero under rated voltage, and the unit is j or W · H.

(5) Energy density, also known as specific energy. It refers to the energy given by the capacitor per unit mass or unit volume, and the unit is w · H / kg or W · H / L.

(6) Power density, also known as specific power. It refers to the discharge power of the supercapacitor per unit mass or unit volume when it produces half of the electric / thermal effect under the matched load. It represents the current bearing capacity of the supercapacitor, in kW / kg or kW / L.

(7) The equivalent series resistance (ESR) is related to the electrolyte, electrode material and preparation process of supercapacitor. Generally, AC ESR is smaller than DC ESR and decreases with the increase of temperature.

(8) The unit of static resistance measured by shunt capacitor is the equivalent leakage current after 72h.

(9) Service life. It refers to the length of time when the electric capacity of the supercapacitor is lower than 20% of the rated capacity or the ESR increases to 1.5 times the rated value. Because it can be judged as the end of its life at this time.

(10) Cycle life: the supercapacitor experiences one charge and discharge, which is called one cycle or one cycle. The cycle life of super capacitor is long, up to more than 100000 times.