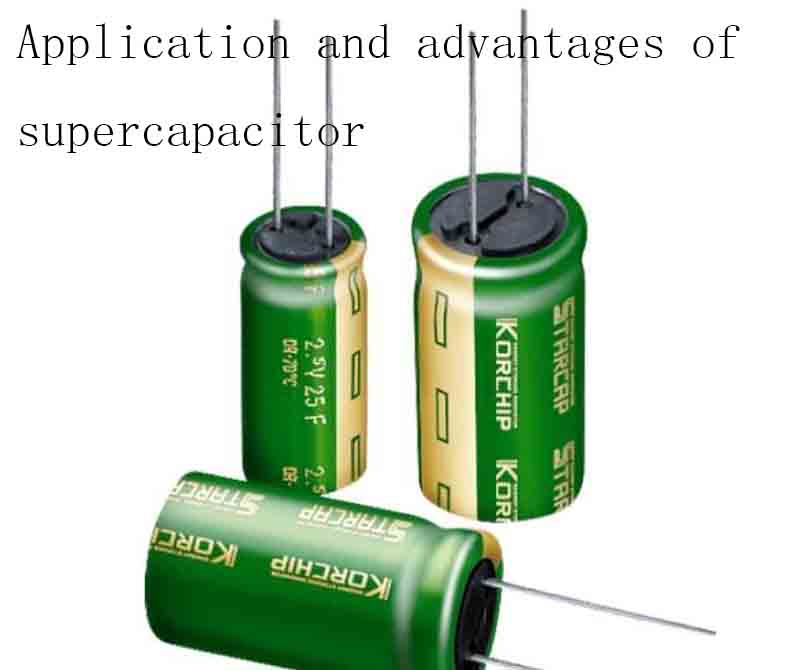 The area of the traditional capacitor is the flat area of the conductor. In order to obtain large capacity, the conductor material is rolled for a long time, and sometimes a special organizational structure is used to increase its surface area. Traditional capacitors use insulating materials to separate their two pole plates, usually plastic film, paper, etc. these materials are usually required to be as thin as possible.

(1) The capacitance is large. The super capacitor uses activated carbon powder and activated carbon fiber as polarizable electrode, and the contact area with electrolyte is greatly increased. According to the calculation formula of capacitance, the larger the surface area of the two plates, the greater the electrical capacity. Therefore, the capacity of general electric double-layer capacitors can easily exceed 1F. Its emergence has suddenly increased the capacity range of ordinary capacitors by 3 or 4 orders of magnitude. At present, the maximum capacity of single supercapacitors can reach 5000f.

(5) It can work normally in a wide temperature range (- 40 ℃ ~ + 70 ℃), while the battery is difficult to work in high temperature, especially low temperature environment.

(6) It can be used in parallel to increase the capacitance. For example, it can also be used in series after voltage equalization.

(7) Long storage life. After the super capacitor is charged, although there is also a small leakage current, the ion or proton migration movement inside the capacitor is generated under the action of electric field, there is no chemical or electrochemical reaction, no new substances are generated, and the electrode materials used are also stable in the corresponding electrolyte. Therefore, the storage life of the super capacitor can be regarded as almost unlimited.

The super capacitor has large enough capacity, low cost and no pollution to the environment. High power super capacitor is of great significance for the start, acceleration and uphill driving of electric vehicles: it can quickly provide high-power current when the vehicle starts and climbs; When the vehicle is running normally, it is quickly charged by the battery; When the vehicle brakes, the large current generated by the generator can be quickly stored, which can reduce the limitation of electric vehicle on large current charging of battery, greatly prolong the service life of battery and improve the practicability of electric vehicle. In view of the importance of electrochemical supercapacitors, industrial developed countries have attached great importance to them and become key strategic research and development projects in various countries.

2.1 application and development of super capacitor in pure electric vehicle

The influence of super capacitor on the dynamic performance of the whole vehicle mainly lies in the influence on the driving range. The capacity, energy density, discharge depth, power density and other performance parameters of supercapacitor will affect the energy consumption and driving range of vehicles.

At present, electric vehicles with low pollution and energy saving have attracted considerable attention in the world. Among the components of electric vehicles, supercapacitors have become one of the important directions of electric vehicle development because of their long service life and strong safety. This electric bus with capacitor as energy has no pollution, zero emission and good low temperature characteristics. It is suitable for the operation of public transportation in northern cities and has good market prospects and social benefits.

The application of supercapacitors to electric buses has become a very hot topic. Since the bus line stops are fixed and the charging time of the supercapacitor is very short, which can be completed within 1min, the charging time of the bus can be used, which will not affect the passenger’s travel time, and there must be two “braids” on the roof like the current tram, which also saves the cost of setting the tram track and looks more beautiful. One disadvantage of supercapacitor is its low energy density. It can only run 2025km at a time, but it has fast charging speed and can continue to run after charging.

The power system of hybrid electric vehicle takes the fuel engine as the main power, and its electric energy storage system is usually the secondary power supply. The use of super capacity capacitor auxiliary starting device in the electric starting system of diesel locomotive shows prominent advantages, which are shown in:

(1) Due to the increase of starting power, the starting time of diesel generator set is shortened. The rotation acceleration of diesel engine increases, which improves the ignition quality of fuel.

(3) The reliability of start-up is ensured, especially at low temperature and when the battery pack loses power or parameters deteriorate.

(4) Under the existing battery technology, the battery capacity can be effectively reduced.

But supercapacitors cannot completely replace batteries because of their low energy density. The working voltage of supercapacitor monomer is low, so it is necessary to connect multiple capacitor monomers in series to obtain a higher working voltage. However, multiple monomers in series have high requirements for the unity of monomers, and the capacity of the system will be doubled after being connected in series. At present, many processes in this field are still under development.

The characteristics of super capacitor just meet the special requirements of hybrid electric vehicle. Using the instantaneous high power characteristics of super capacitor, the special requirements of frequent engine start and instantaneous high power provided by battery are avoided. At the same time, the braking energy can be recycled, which can save energy and reduce emission pollution. It is especially suitable for hybrid electric vehicles that often drive in cities. In terms of recovering braking energy, at least 30% of the energy of the car is consumed due to heat dissipation and braking during driving, especially in cities, which often encounter red lights, which not only causes energy waste, but also increases environmental pollution. If the energy consumed by braking can be recovered for vehicle starting and acceleration, it can be said to kill two birds with one stone. Because the battery charging is completed through chemical reaction, it takes a long time, but the braking time is short, so the effect of energy recovery is poor. The unique characteristics of super capacitor are very suitable for energy recovery in the braking process, with low cost and broad application prospects.

In terms of providing instantaneous high power for the cold start of the engine, the cold start of the engine puts forward special requirements for the battery. The battery must provide instantaneous high power before the engine can start. However, the general battery does not have this characteristic, unless the starting ignition battery is used, but the starting ignition battery is not suitable for long-term low current working environment, and it often fails at low temperature, so it is not suitable. It is found that this problem can be solved if the super capacitor and battery are combined in the engine starting system to give full play to the unique characteristics of super capacitor and form a new starting system.

Precautions for the use of supercapacitors include:

(1) Supercapacitors have a fixed polarity. The polarity shall be confirmed before use.

(2) Super capacitors should be used under nominal voltage. When the capacitor voltage exceeds the nominal voltage, it will lead to electrolyte decomposition, while the capacitor will heat, reduce capacity, increase internal resistance and shorten service life. In some cases, it can lead to capacitor performance collapse.

(6) For the ambient gas in use, the supercapacitor shall not be located in places with relative humidity greater than 85% or containing toxic gas. These environments will lead to corrosion of leads and capacitor shell, resulting in open circuit.

(10) After installing the super capacitor, do not tilt or twist the capacitor forcibly, which will lead to looseness of the capacitor lead and performance degradation.

The appearance of supercapacitor solves the contradiction between power density and energy density in energy system. With the further development of supercapacitor technology, it will replace the current frequently replaced battery, and the household energy storage system may also be realized. As an energy storage system with huge energy storage, fast charging and discharging speed, wide working temperature range, safe and reliable operation, no maintenance and low price, if it can be widely used in power system, it will promote technological progress and achieve greater economic benefits.