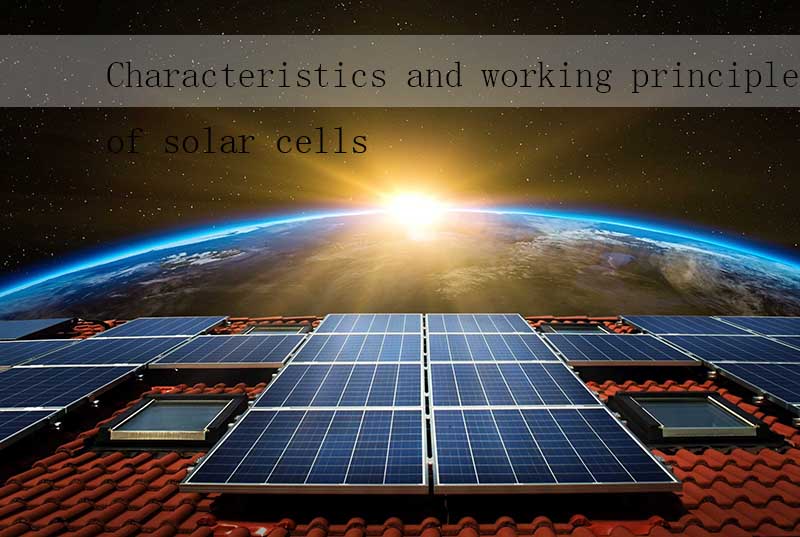 Solar cells are made of silicon PN structure, forming ohmic contact without rectification characteristics on the surface and back. It is assumed that there is no other resistance component in the circuit except the load resistance R. When a photon with HV (EV) (HV > eg, eg is the band gap width of silicon) energy irradiates on the solar cell, an electron hole pair is generated. Because the energy of photons is larger than the band gap width of silicon, electrons are excited to a higher energy level than the bottom of the conduction band. For p-type silicon, the minority carrier concentration NP is very small (generally less than 105 / cm), and the energy levels of the conduction band are almost empty, so the electrons immediately fall at the bottom of the conduction band. At this time, electrons and holes transfer the excess energy of the total HV eg (EV) to the lattice in the form of phonons (lattice vibration). Some of the electrons falling to the bottom of the conduction band diffuse to the surface or junction, and some compound inside or on the surface of the semiconductor and disappear. However, some carriers arriving at the junction are accelerated by the built-in electric field at the junction and flow into n-type silicon. In n-type silicon, because the electrons are most carriers, the incoming electrons propagate in the order of dielectric relaxation time. At the same time, in order to meet the carrier electrical neutrality condition in n-type silicon, the same number of electrons as the incoming electrons flow out of the electrode connecting n-type silicon.

Short circuit current, the short circuit current of solar cell is equal to its photogenerated current. The most convenient way to analyze the short-circuit current is to divide the solar spectrum into many segments, each segment has only a narrow wavelength range, and find out the current corresponding to each segment of the spectrum. The total short-circuit current of the battery is the sum of the contributions of all spectral segments. The reflectance on the actual semiconductor surface is related to the wavelength of incident light, which is generally 30% ~ 50%. In order to prevent the reflection of the surface, a transparent thin film layer with a refractive index between the semiconductor and the air is prepared on the semiconductor surface. This thin film layer is called antireflective coating. By overlapping two layers of oxide films with different refractive indexes, the refractive index can be reduced in a wider wavelength range under certain conditions. In addition, the surface can also be processed into a pyramid to prevent surface reflection.

In order to describe the working state of solar cells, the output characteristics of solar cells are often simulated by an equivalent circuit. Under constant illumination, the photocurrent of a solar cell in working state does not change with the working state. It can be regarded as a constant current source in the equivalent circuit. Part of the photocurrent flows through the load RL and establishes the terminal voltage V at both ends of the load. In turn, it is positively biased to the p-n junction diode, resulting in a dark current LBK in the opposite direction of the photocurrent. However, due to the electrodes and contacts on the front and back and the material itself has a certain resistivity, it is inevitable to introduce additional resistance in the base and top layer. The current flowing through the load, when passing through them, will inevitably cause loss. In the equivalent circuit, their total effect can be expressed by a series resistance rs. Due to the leakage at the edge of the battery and the leakage of the metal bridge formed at the microcracks and scratches of the battery when making the metallized electrode, part of the current that should have passed through the load is short circuited. This effect can be equivalent to a parallel resistance RSH.

The spectral response of solar cells refers to the relationship between photocurrent and human radiation wavelength. The wavelength per unit time is set as λ The number of photons per unit area of light entering the body is Φ 0（ λ）， The surface reflection coefficient is ρ （ λ）， The photocurrent generated is JL, where JL = JLL term layer + JLL barrier + JLI base region.

The irradiation effect of solar cells, as the power supply of artificial satellites and spacecraft, solar cells have been widely used. But there are high-energy particles in outer space, such as electrons, protons γ Particles, etc. When irradiated by high-energy particles, the energy is transmitted to the lattice through the collision with lattice atoms. When the transmitted energy is greater than a certain threshold, the lattice atoms will shift and produce lattice defects, such as interstitial atoms, vacancies, defect clusters, vacancy impurity complexes, etc. These defects will act as recombination centers, thus reducing minority carrier lifetime. A lot of research work shows that the life parameter is the most sensitive to irradiation defects, and it is precisely because irradiation affects the life value, which reduces the performance of solar cells.

(3) Composite life. It is hoped that the longer the recombination life of carriers, the better, mainly because the LSC is large. In indirect band gap semiconductor materials such as Si, the junction separation is 100 μ A considerable number of carriers are also generated at m, so it is hoped that their lifetime can be greater than 1 μ s。 In direct band gap materials, such as GaAs or Cu2S, the composite life as long as 10ns is long enough. Long life also reduces dark current and increases VOC. The key to achieve long life is to avoid the formation of composite centers in the process of material preparation and battery production. In the processing process, appropriate and frequent process treatment can remove the composite center and prolong the service life.

The conversion efficiency of a solar cell is the ratio of its output power to its input power. In order to obtain high efficiency, we hope to have large short-circuit current, high open circuit voltage and large filling factor. If the solar cell is made of materials with small band gap (eg), the short-circuit current is large. Good manufacturing technology and good battery design can also increase the short-circuit current due to the minimum carrier recombination. If solar cells are made of materials with large eg, they have high open circuit voltage. The filling factor is a measure of the steepness at the inflection point of the I-V curve, which can be reduced by series resistance. Generally, when the open circuit voltage is high, FF is also large. The conversion efficiency increases with the increase of light intensity and with the decrease of temperature.

Solar cells made of materials with an eg value of 1.2ev ~ 1.6ev are expected to achieve the highest efficiency. Direct band gap semiconductors are preferred for thin-film batteries because they can absorb photons near the surface.

Single solar cells cannot be directly used as batteries. For power supply, several single batteries must be connected in series and parallel and tightly packaged into components. The requirements for solar cell modules are as follows: there is a certain nominal working current and output power. The service life is long, and the components are required to work normally until 2030. Therefore, the materials, parts and structures used by the components are required to be consistent with each other in service life, so as to avoid the failure of the whole component due to one damage. Have sufficient mechanical strength to withstand conflicts, vibration and other stresses during transportation, installation and use. The electric performance loss caused by the combination is small and the cost is low.