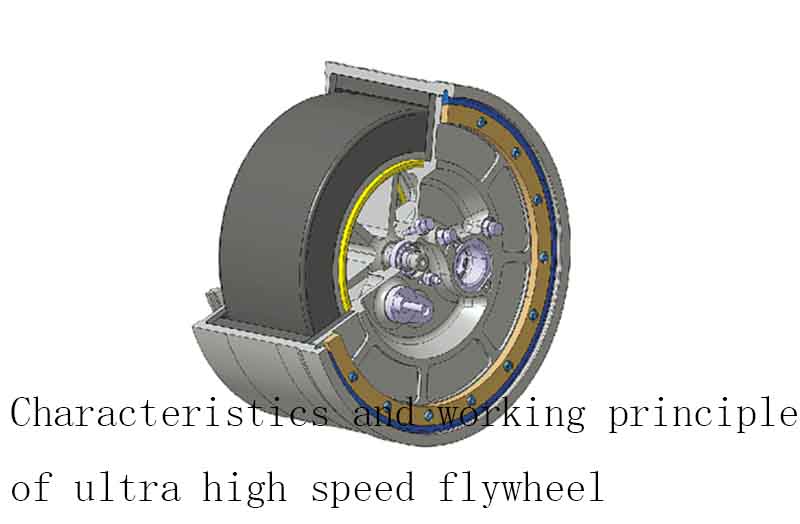 In recent years, the development of magnetic levitation technology, combined with vacuum technology, high temperature superconducting technology and the emergence of permanent magnet materials with high magnetic energy product, has greatly reduced the mechanical friction and wind resistance of the flywheel support system and improved the flywheel speed.

The emergence of various power electronic components and high-speed motors provides great flexibility for the power conversion and control of flywheel batteries.

Among the above technologies, the development of magnetic levitation technology is an important factor to promote the research and development of energy storage flywheel. Most of the early flywheels used mechanical bearings (such as gem bearings). The friction loss of mechanical bearings is large, so the energy loss is serious. The application of magnetic bearing in modern high-performance flywheel battery makes it possible for people to use the high-speed rotating flywheel rotor to obtain the dream of large capacity and long-term energy storage.

Ultra high speed flywheel, also known as flywheel energy accumulator or flywheel battery, uses the ultra-high speed rotating flywheel to store energy, and realizes the mutual conversion of mechanical energy and electric energy through electromechanical energy conversion device. Based on its high specific energy, high specific power, high conversion efficiency between electric energy and mechanical energy, fast charging, maintenance free and good cost performance, ultra-high speed flywheel has a wide application prospect in electric vehicles, aviation, aerospace, power grid peak shaving, uninterrupted power supply of wind power generation system, military and other fields. The research shows that the vehicle weighing 2200kg needs about 78kw · h energy storage and 94kw power generation to maintain the journey of 200250km and the acceleration process of 1096km / h in 10s. In the early 1980s, Oerlikon engineering company of Switzerland successfully developed the first bus powered entirely by flywheel. The flywheel has a diameter of 1.63M and a weight of 1.5T. It operates at 3000r / min in hydrogen environment to reduce wind loss. The car has 70 passengers and a journey of about 0.8km. When parking at each stop, the flywheel will need to be charged for 2min. After years of research and testing, AFS has produced the flywheel battery car afs20, which is based on the Chrysler LHS car. It is an electric vehicle completely powered by the flywheel battery. It is driven by 20 flywheel batteries, each with a diameter of 230mm and a mass of 13.64kg. It takes 6h for the battery to be charged with mains power, while it only takes 15min for fast charging, and the driving distance of one-time charging can reach 560km.

(2) In the energy holding phase, the motor maintains almost a constant speed until a control signal for energy release is received.

(3) When it is necessary to supply power to the load, the high-speed rotating flywheel rotor is used as the prime mover to drive the motor to generate electricity, and the current and voltage suitable for the load are output through the power converter. At this time, the motor is in the state of generator, so as to complete the energy release process of mechanical energy electric energy conversion. Thus, the whole flywheel energy storage system completes the process of primary electric energy input, storage and output. Flywheel battery is generally composed of high-speed rotating flywheel rotor, motor / generator, bearing support system, power conversion device, electronic control equipment and additional equipment (such as vacuum cover and emergency standby bearing).

Resistance in the process of energy storage and release of ultra-high speed flywheel.

In the process of storing and releasing energy, the flywheel will be affected by the resistance of the surrounding air. Therefore, the ultra-high speed flywheel generally rotates at high speed in a sealed vacuum shell.

Under normal circumstances, if the minimum speed is selected as 1 / 2 of the maximum speed, 3 / 4 of the total stored energy can be utilized, and the discharge depth can reach 75%.

The calculation shows that when a flywheel with a diameter of 230mm and a mass of 13.5kg reaches a specific energy of 150W · H / kg, the flywheel speed will reach 150000.2 million R / Ming. At such a high speed, the centrifugal force on the materials for manufacturing the flywheel is 12 times greater than that of steel. When the stress generated by the centrifugal force is too large, the fragments after the flywheel is broken will produce great destructive force. Therefore, the material and shape of the flywheel are the focus of the design. The shape of flywheel usually adopts the principle of equal stress design, that is, each part of flywheel rotor has equal stress. Therefore, the flywheel thickness should decrease with the increase of rotor radius. Moreover, the material of flywheel rotor is required to be absolutely uniform and balanced, and must have very good dynamic balance accuracy.

(1) The flywheel motor shall be reversible and can operate in both electric and power generation states.

(2) The flywheel energy storage is directly proportional to the square of the speed, so the flywheel motor is required to have a high running speed.

(3) Energy storage and release require that the motor can adapt to a wide range of speed changes.

(5) Long time energy storage operation requires that the no-load loss of the motor should not be too large.

(6) The motor is required to have large torque output capacity and power capacity.

(7) The motor is required to have high operation efficiency and good speed regulation performance.

Starting from the above requirements, the commonly used motors now include permanent magnet brushless motor, three-phase brushless DC motor, reluctance motor and induction motor. These motors are used in flywheel design outside China. Among them, permanent magnet brushless DC / AC motor is mostly used. It has the advantages of convenient regulation and control, wide speed regulation range, low rotor loss, easy realization of two-way power conversion, and simple structure, It can be made into various shapes according to the design requirements of flywheel battery, so it has great attraction in flywheel energy storage device, especially in flywheel system with speed above 30000r / Ming. At present, the speed of permanent magnet motor can reach 200000 R / Ming. The flywheel battery of indigo energy company adopts three-phase high-efficiency permanent magnet brushless motor, and its energy conversion efficiency is greater than 95%.

In the early flywheel battery devices, mechanical bearings such as ceramic bearings, gem bearings and rolling bearings are mostly used. Due to mechanical friction and wear, this kind of bearing mode has low speed, low service life and low operation efficiency. It is generally suitable for rapid charge and discharge systems. Therefore, most modern new flywheel energy storage systems do not use mechanical bearings. However, because of its simple, compact and firm structure, it is generally used as the auxiliary bearing of flywheel rotor in emergency.

In recent years, represented by the ultra-high speed maglev train, the technology of suspending objects by magnetic force has tended to the practical stage. For the rotating body, instead of the past mechanical bearing, the use of non-contact magnetic bearing has become an ideal choice for the rotor support system of flywheel battery. The magnetic bearing technology has the following characteristics.

(3) The speed of the magnetic suspension flywheel is only limited by the centrifugal force of the rotor, and the circumferential speed is high. Therefore, the ratio of rotor angular momentum to mass can be greatly improved, so as to reduce the mass of the flywheel.

(1) During schedule maintenance, the electromagnetic bearing does not work, but to keep the rotor rotating at low speed, auxiliary bearings are needed to support the rotor.

(2) During operation, the magnetic bearing is suddenly powered off for some reason. For safety reasons, the auxiliary bearing is required to temporarily support the rotor until the rotor stops completely.

In order to reduce wind loss and prevent safety accidents of high-speed rotating flywheel, the flywheel system is generally placed in a high vacuum sealed casing. Although increasing the vacuum can reduce the wind loss, the heat dissipation function is weakened due to the thin gas environment, and the temperature of the rotor is easy to rise.

As a new member of the battery family, this new kinetic energy battery has the following outstanding advantages compared with the traditional chemical battery.

(3) Long cycle life, no overcharge and over discharge problems. Chemical batteries generally cannot be deeply discharged or overcharged, otherwise their service life will decline sharply. When the flywheel battery is deeply discharged, its performance is not affected at all, and it is very easy to prevent overcharge (actually limiting the maximum speed of the rotor) with the help of power electronic devices. The service life of flywheel battery mainly depends on the service life of its power electronic device, so it can run repeatedly for millions of times, generally up to about 20 years.

(4) It is easy to measure the discharge depth and the charging time is short. As long as the flywheel battery measures the rotating speed of the rotor, it can accurately know the discharge depth, while the chemical battery is not so easy. In addition, the charging of a flywheel battery is generally completed in a few minutes, while the chemical battery takes a few hours, usually seven or eight hours.

(5) It is not sensitive to temperature. The performance of chemical battery will decline sharply at high or low temperature, while that of flywheel battery is not.

(7) Low loss, unique bearing system and vacuum working environment make the mechanical loss negligible, and other losses can also be minimized to a negligible level through design.

Different from the fixed energy storage device, the ultra-high speed flywheel currently faces two major problems. Firstly, when the running direction of the system changes (such as turning or bumping, deviating from the straight line), the flywheel will produce gyro torque, which will seriously affect the handling performance of the system; Secondly, when the flywheel fails, the energy stored in the flywheel in the form of mechanical energy will be released in a short time, and the high-power output will cause great damage to the system and the use matrix. For example, if 1kW · h flywheel fails, 7203600kw power output will be generated within 15s. Therefore, fault suppression has always been a huge obstacle to the use of ultra-high speed flywheel. A simple measure to reduce the gyro torque is to use multiple small flywheels and connect them into groups. Half rotate clockwise and the other half rotate counterclockwise. In theory, the total gyro torque acting on the operating system is zero. But in fact, there are still many problems in the distribution, arrangement and coordination of these flywheels. Moreover, the total specific energy and specific power of these flywheels may be less than that of a single flywheel. Although this method has been applied, it needs to be improved. Another new suppression measure is to increase the thickness of the flywheel rotor edge instead of reducing the flywheel edge thickness according to the equal stress design principle. When the flywheel rotor fails, the thicker part of the rotor edge will fall off first and act as a fuse. The flywheel rotor named “Kavlar” invented abroad uses carbon fiber reinforced epoxy resin composite with high strength and low density. When the flywheel is damaged by centrifugal force, this material will disperse into flocculent fluff and will not cause harm. Therefore, selecting super strong composite material is one of the safety measures to solve the problems faced by the flywheel.