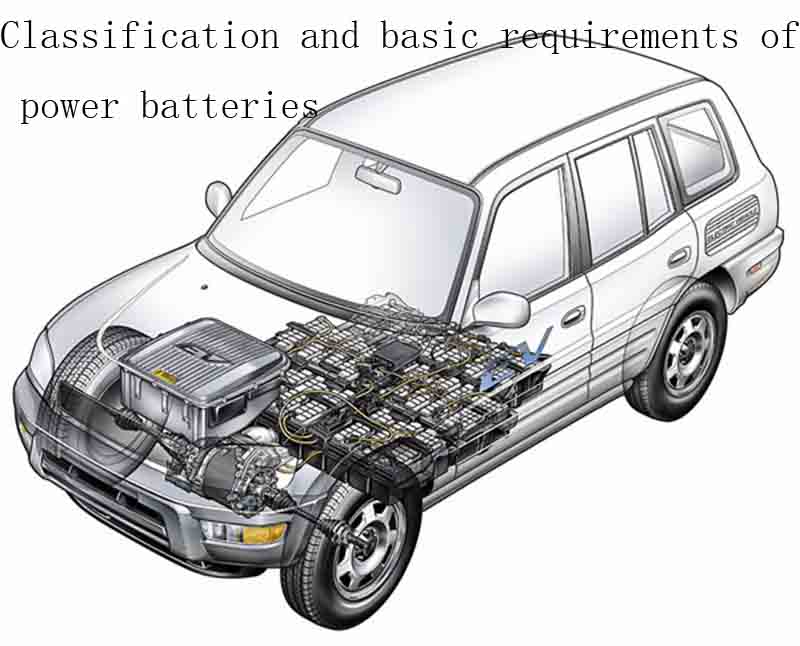 There are many kinds of power batteries for new energy vehicles, which are widely used and have different shapes. There are many classification methods.

1.1 classification according to the working nature and use characteristics of the battery

According to the working nature and use characteristics of batteries, they are generally divided into four categories.

(3) Reserve battery. Also known as “activated battery”, it is a kind of battery in which the positive and negative active substances are not in direct contact with the electrolyte, and the electrolyte is temporarily injected or activated by other methods before use. The positive and negative active substances of such batteries are chemically deteriorated or self discharged, which are basically eliminated due to isolation from the electrolyte, so that the batteries can be stored for a long time, such as magnesium silver batteries, calcium thermal batteries and lead perchloric acid batteries.

(4) Fuel cell. Also known as “continuous battery”, that is, as long as the active substance is continuously injected into the battery, it can discharge continuously for a long time. Its characteristic is that the cell itself is only a carrier. The fuel cell can be regarded as a kind of cell that sends reactants from the outside when electric energy is needed, such as hydrogen fuel cell and air fuel cell. It must be pointed out that the above classification method does not mean that a certain battery system can only belong to primary battery, secondary battery, reserve battery or fuel cell. On the contrary, a certain battery system can be designed into different types of batteries according to needs. For example, zinc silver battery can be designed as primary battery, secondary battery or reserve battery.

1.2 classification according to battery reaction principle

According to the principle of battery reaction, it can be divided into three categories: chemical battery, physical battery and biological battery.

(1) Chemical battery. The chemical reaction of substances is used to generate electricity. According to the working nature, chemical cells are divided into primary cells, storage batteries, fuel cells and reserve cells.

(2) Physical battery. Physical battery is a battery that generates electricity by using physical energy such as light, heat and physical adsorption, such as solar cell, super capacitor, flywheel battery, etc.

(3) Biological battery. Biological cells are batteries that generate electricity by biochemical reactions, such as microbial cells, enzyme cells, biological solar cells and so on.

(5) Rated voltage. It refers to the recognized standard voltage when the battery of the electrochemical system works. For example, zinc manganese dry battery is 1.5V, nickel cadmium battery is 1.2V and lead-acid battery is 2V.

(8) Voltage efficiency. It refers to the ratio of the working voltage of the battery to the electromotive force of the battery. When the battery is discharged, the working voltage of the battery is less than the electromotive force due to the existence of electrochemical polarization, concentration polarization and ohmic voltage drop. Improving electrode structure (including real surface area, porosity, pore size distribution, size of active material particles, etc.) and adding additives (including conductive materials, expanders, catalysts, hydrophobics, doping, etc.) are two important ways to improve battery voltage efficiency.

It refers to the amount of electricity that can be released under certain discharge conditions after the battery is fully charged. It is represented by symbol C, and its unit is ampere hour (a · h) or milliampere hour (MA · h). The capacity is related to the discharge current and the cut-off voltage of charge and discharge. The capacity of battery can be divided into theoretical capacity, rated capacity, actual capacity and nominal capacity.

(1) Theoretical capacity. Assuming that all electrode active substances participate in the electrochemical reaction of the battery, the electric quantity that can be provided is the highest theoretical value calculated according to Faraday’s law.

(2) Rated capacity. Rated capacity, also known as guaranteed capacity, refers to the minimum amount of electricity that can be released by the battery under certain discharge conditions in accordance with the standards issued by the state or relevant departments when designing and manufacturing the battery.

(1) Theoretical energy. If the dummy battery is always in equilibrium in the discharge process, its discharge voltage maintains the value of electromotive force, and the utilization rate of active material is 100%, that is, the discharge capacity is equal to the theoretical capacity, then the energy output by the battery under this condition is the theoretical energy, that is, the maximum work done by the reversible battery under constant temperature and voltage.

Mass specific energy refers to the energy that can be output by the battery per unit mass. The unit is usually w · H / kg.

Volume specific energy refers to the energy that can be output by a unit volume of battery, also known as energy density. The unit is usually w · H / L.

As an energy storage, the power battery converts electric energy into chemical energy when charging and releases electric energy when discharging. In this reversible electrochemical conversion process, there is a certain energy loss. It is usually expressed by the capacity efficiency and energy efficiency of the battery. For electric vehicles, the driving range is one of the most important indicators. On the premise of a certain amount of battery power and output impedance, according to the law of energy conservation, the output energy of the battery pack is transformed into two parts: one part is lost on the resistance as heat consumption; The other part is provided to the motor controller and transformed into effective power. The ratio of the two parts of energy depends on the ratio of the output impedance of the battery pack to the equivalent input impedance of the motor controller. The smaller the impedance of the battery pack, the smaller the useless heat consumption and the greater the output efficiency.

Battery power refers to the energy output per unit time of the battery under a certain discharge system, and the unit is watt (W) or kilowatt (kw).

When it comes to battery capacity or energy, it is necessary to point out the discharge current or discharge conditions, which are usually expressed by discharge rate.

The deeper the discharge depth of the secondary battery, the shorter its charging life. Therefore, deep discharge should be avoided as far as possible.

How much power the battery has, also known as the remaining power, is often taken as its ratio to the rated capacity or actual capacity, which is called the degree of charge. Charge is the parameter data that people are most concerned about in use, and it is also the most difficult to obtain. People have tried to calculate the charge by measuring the change of internal resistance, voltage and current, and have done a lot of research work. However, until now, any formula and algorithm can not be effectively supported by statistical data, and the indicated charge degree always changes nonlinearly.

2.9 storage performance and self discharge

For all chemical power supplies, even if they are placed in an open circuit without contact with the external circuit, the capacity will decay naturally. This phenomenon is called self discharge, also known as charge holding capacity.

The storage performance of battery refers to the change of main performance parameters after the battery is stored for a certain time under certain conditions, including the decline of capacity, appearance and whether there is deformation or seepage. National standards are limited by battery capacity decline, appearance change and liquid leakage ratio.

Battery life is divided into storage life and service life.

The requirements of new energy vehicles for power batteries mainly include:

(5) Adapt to the vehicle operating environment, the battery can work normally and stably under normal temperature conditions, is not affected by the ambient temperature, does not need special heating and insulation system, and can adapt to the vibration of electric vehicles.

(6) Safe and reliable. The terminal post shall be clean and the battery shell shall not be corroded. It shall not cause white burning or burning, and will not cause injury to passengers in case of collision and other accidents. The waste battery can be recycled and reused, and the harmful heavy metals in the battery can be recycled and treated in a centralized manner. The battery pack can be replaced quickly by mechanical device, and the line connection is convenient.

(7) Long life and maintenance free. The cycle life of the battery shall not be less than 1000 times, and maintenance and repair are not required within the limited service life.