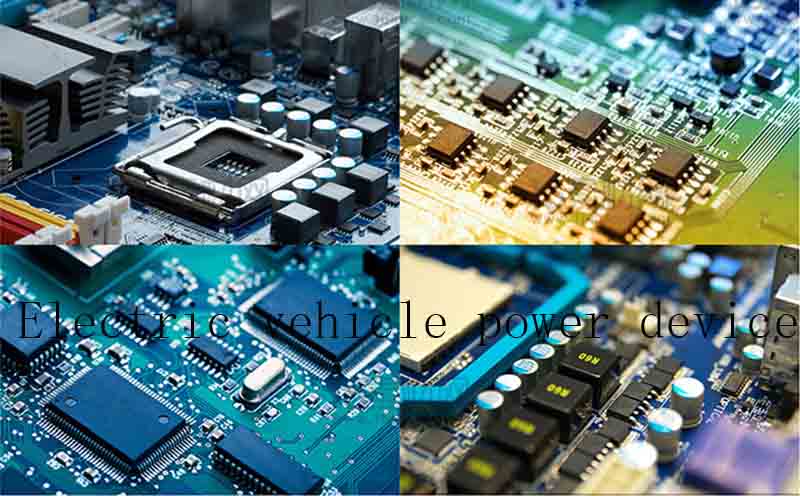 In the past few decades, power semiconductor device technology has made great progress. These power devices have made revolutionary progress in power rating and performance. Among the existing power devices, the power diode is used as a free switch, while other power devices, such as thyristor, GTO, BJT, MOSFET, IGBT, Sith, MCT, etc., are externally controllable. The research on high-performance power devices is still ongoing. At present, IGBT is the most widely used in New energy vehicles.

When selecting power devices driven by electric power, the following requirements must be considered.

(1) Rating. The rated voltage is determined according to the voltage specified on the battery nameplate, the maximum voltage during charging and the maximum voltage during regenerative braking. The rated value of the current depends on the peak value of the rated power of the motor and the number of power devices connected in parallel. When these devices are connected in parallel, their conduction state must match the switching characteristics.

(3) Power loss. The voltage drop or loss during conduction shall be minimized, and the switching loss shall be as small as possible. Because high switching frequency will increase switching loss, energy density, noise and electromagnetic interference can be optimized at 10kHz. The leakage current shall be limited within 1mA to minimize the loss in the disconnected state.

(4) Base / gate drivability. The device shall consider simple and safe base or gate drive. The corresponding driving signal is either solution voltage / current or linear voltage / current. Voltage driven mode has very low energy consumption and is usually preferred.

(6) Solid. The power device shall have sufficient anti overload capacity to withstand the huge energy in case of overvoltage, and can be protected by quickly fusing the semiconductor fuse in case of overcurrent. It shall not use and minimize the use of buffer circuit. Due to the frequent deceleration of electric vehicle, the power device will cause frequent thermal shock. It should work reliably under this hot pressing condition.

Considering the above requirements, people are considering the application of power devices such as GTO, BJT, MOSFET, IGBT and MCT to the drive of electric vehicles. The thyristor is not considered because it requires additional converter devices to turn off, and its switching frequency is limited to 400Hz. Due to the on property and limited availability of sit and Sith, they are also excluded.

Initially, the DC chopper appeared in the 1960s. It uses the semiconductor thyristor with forced judgment, which is limited to operating under the low-frequency switch. Due to the emergence of fast switching power devices, this chopper can now work at tens or even hundreds of kHz. When used for electric vehicle drive, the two quadrant DC chopper is the most ideal, because in the motor drive mode, it can convert the DC voltage of the battery into variable DC voltage, and can reverse convert the energy during regenerative braking. Moreover, the four quadrant DC chopper is used for the reversible and regenerative speed control of DC motor.

Inverters are usually divided into voltage input type and current input type. Because a large number of inductive elements are needed to simulate the current source, the current supply inverter is rarely used in the drive of electric vehicles. Because the voltage input inverter is very simple and can carry out bidirectional energy conversion, it is almost only used in electric vehicles. According to different needs, its output waveform can be square wave, six step or pulse width modulation waveform. For example, it can output square wave for permanent magnet brushless DC motor and six step waveform or pulse width modulation waveform for induction motor. It should be pointed out that the six step waveform has been eliminated because its amplitude can not be directly controlled and its harmonics are rich. In addition, the harmonic of PWM waveform is appropriate, and its basic quantity and frequency change gently during speed control.

In the past decade, a large number of PWM switching schemes suitable for voltage input inverter have been developed. These schemes focus on resisting harmonics, making better use of DC voltage, resisting DC voltage fluctuation, and suitable for real-time and microcontroller based implementation. They can be divided into voltage control and current control PWM. At present, the most advanced voltage control PWM schemes include natural or sinusoidal PWM, regular or unified PWM, harmonic elimination or optimal PWM, triangular PWM, no carrier or random PWM and equal area PWM. In addition, for high-performance motor drive, because the torque and magnetic flux of the motor are directly related to the controlled current, the application of current control of voltage input inverter is particularly attractive. The technical development status of current control PWM scheme includes PWM with hysteresis band or band band, PWM with instantaneous current control by voltage, space vector PWM and so on.

The power inverter can use soft switch instead of forced switch. The key of soft switching is to use resonant circuit to form current or voltage waveform, so that the power switching device is in zero voltage or zero current state. Generally speaking, soft switching inverter has the following advantages.

(1) Due to the zero voltage or zero current state, the switching loss of the power device is zero, so the efficiency is high.

(2) Due to low heat consumption and no buffer, the volume and mass of the converter are reduced, so the power density is high.

(3) Due to the use of soft switch to minimize the pressure of the switch, the reliability of the device has been improved.

(4) Due to the small voltage resonance pulse, electromagnetic interference and device insulation are no longer the main problems.

(5) Due to the high switching frequency, the noise is very small.

Compared with the development of soft switching inverter of AC motor, the soft switching technology of switched reluctance motor is rarely developed. A new soft switching inverter, the so-called zero voltage conversion type, is specially designed for switched reluctance motor. All the main switches and diodes of this new inverter can work in zero voltage state, the voltage and current pressure of the device are unified, and has a wide working range. Moreover, its circuit is very simple, the number of hardware required is the least, and the cost is low. It can achieve high switching frequency, high power density and high efficiency.

With the emergence of Microcomputer in the 1970s, microelectronic technology has developed very rapidly in the past 40 years. Modern microelectronic devices can be roughly divided into microprocessors, microcontrollers, digital signal processors (DSP) and transmission machines.

Microprocessor technology is considered as a milestone in the development of microelectronic technology, such as 8086, 80186, 80286, 80386, 80486, Pentium, Pentium II and Pentium III. Microprocessor is the CPU of microcomputer, which can be used to compile instructions, control operation behavior and execute all algorithms and logic operations. Unlike microprocessors, microcontrollers such as 8096 and 80960, including all resources such as CPU, ROM or EPROM, ram, DMA, timer, interrupt source, a / D and D / a converter and input / output interface, can be used as stand-alone and single-chip controllers. In this way, the microprocessor based on electric vehicle drive system has the advantages of minimum hardware and centralized software. Digital signal processor (DSP), such as TMS320C30, 320c40 and i860, has the ability to quickly calculate floating-point data. It can meet the requirements of high-performance complex control algorithm of electric drive motor. The chip to be mentioned is the chip of Freescale, whose products occupy a leading position in the field of automotive electronics. With the gradual maturity of reference materials, its S12 series and DSC series chips will be more and more used in Chinese automobiles.

Traditional linear control, such as PID, can not meet the harsh requirements of high-performance motor drive. In recent years, many advanced control strategies have emerged. It is applicable to the development status of motor drive control strategy, including adaptive control, variable structure control, fuzzy control and neural network control.

Variable structure control (VSC) has recently been applied to motor drive to compete with adaptive control. Using VSC, the system provides insensitive parameter characteristics, specifies error dynamics, and simplifies the operation. According to a series of switch control principles, the system must operate in the phase plane according to the preset track, regardless of how the system parameters change.

New technologies such as fuzzy logic and neural network have also been introduced into the field of motor control recently.

Fuzzy control is essentially a language process, which is based on the previous experience and trial rules used by human behavior. Using neural network control (NNC), the controller can explain the dynamic behavior of the system, and then self-study and adjust itself accordingly. In addition, this advanced control strategy can be combined with other control strategies to form new control modes, such as adaptive fuzzy control, fuzzy NNC and fuzzy VSC. In the near future, the controller using artificial intelligence (AI) can carry out system diagnosis and error correction without human intervention.