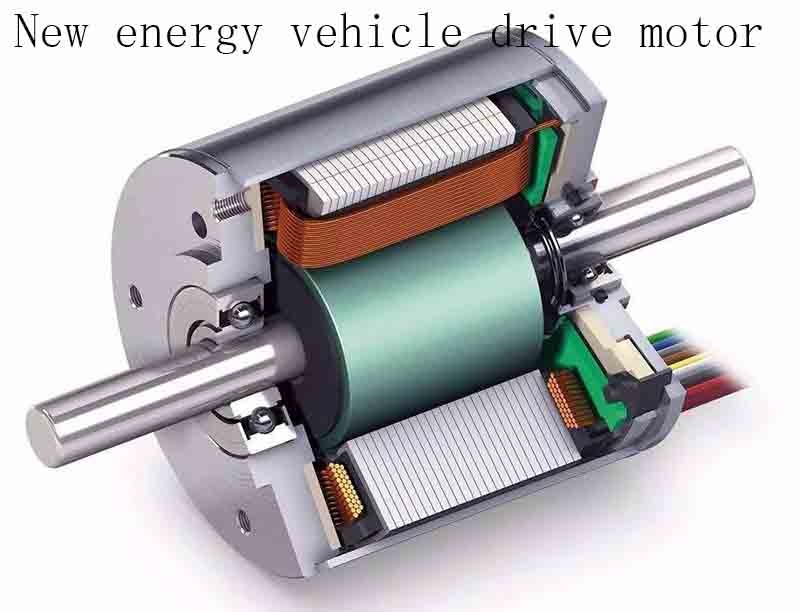 The task of the motor drive system is to efficiently convert the energy of the battery into the kinetic energy of the whole vehicle under the control of the driver, or feed back the kinetic energy of the whole vehicle to the battery. According to the functional division, the motor drive system of new energy vehicles can be divided into electrical and mechanical systems. The electrical system consists of three subsystems: drive motor, power converter and controller; The mechanical system is mainly composed of mechanical transmission (optional) and wheels. The controller is divided into three functional units: sensor, connecting circuit and processor. The sensor converts various measured data, such as current, voltage, temperature, speed, torque and electromagnetic flux, into electrical signals, which can be switching, digital or analog. These electrical signals are adjusted to appropriate values through the connecting circuit and input to the processor. The output signal of the processor is usually amplified to drive the semiconductor element of the power converter. In the process of driving and energy regeneration (the energy refers to the electric energy stored in the battery), the energy flow between the energy source and the motor is regulated by the power converter. The motor and the wheel are connected together through a mechanical transmission device, which is optional because the motor can also be directly installed on the wheel, that is, the electric wheel drive.

Various driving motors used for new energy vehicles are different from ordinary industrial motors. They are usually required to start and stop frequently, accelerate and decelerate. They require high torque at low speed or climbing, low torque at high speed and large speed range; Industrial drive motors are usually optimized at the rated operating point. Therefore, the driving motors of new energy vehicles should be classified into one category. The main characteristics in terms of load requirements, technical performance and working environment are as follows:

(3) The driving motor of new energy vehicles requires high specific power and excellent efficiency (high efficiency in a wide range of speed and torque), so as to reduce the dead weight of the vehicle and prolong the driving range; Industrial drive motors are usually considered comprehensively compared with power, efficiency and cost.

(4) When there are multiple motors working together, the driving motors of new energy vehicles are required to have high controllability, high steady-state accuracy and good dynamic performance; The industrial drive motor only meets a specific performance requirement.

(5) The driving motors of new energy vehicles are often installed on motor vehicles. Limited by the volumetric efficiency of vehicles, they work under working conditions such as high temperature, bad weather and background vibration, while industrial driving motors are usually fixed.

In addition to the above special requirements, from a technical point of view, the following points should be paid attention to.

The selected voltage level of the new energy vehicle system will greatly affect the design of the drive motor system. Using reasonable high voltage motor can reduce the cost and volume of inverter. If the required voltage is too high, many batteries need to be connected in series, which will reduce the space in the car and luggage compartment, increase the quality and cost of the vehicle, and reduce the performance of the vehicle.

The matching between motor and converter (also known as frequency converter), controller, transmission, energy, etc. is very important. The designer of new energy vehicle drive motor should fully understand the characteristics of these components, and then design the motor under given conditions. The design of industrial drive motor should be different.

The basic factors to be considered in the design of the motor include: magnetic load – the peak value of the basic component of the magnetic flux density passing through the air gap of the motor, electrical load – the root mean square of the total current per unit perimeter or the number of ampere turns per unit perimeter of the motor, power and torque per unit volume and per unit mass, magnetic flux density per unit magnetic circuit, speed, torque, power loss and efficiency, as well as thermal circuit design and cooling. The corresponding key points are: better utilization of steel, magnet and copper, better electromagnetic coupling, motor geometry and layout, better thermal design and cooling, understanding the limitations of motor performance, and understanding the relationship between motor geometry, size, parameters and performance. Only in this way can the motor with higher unit mass power, unit mass torque and better performance be designed. For example, compared with the previous generation of Prius 2004 products, the power increases from 33kw to 50KW with little change in volume and mass.

Because the magnetic field of the excitation winding and the magnetic field of the armature winding are vertically distributed, the DC motor with commutator has very simple control principle, large torque and good speed regulation performance. It has always played a prominent role in the field of electric drive. By replacing the excitation winding of DC motor with permanent magnet material, the radial space is effectively used, so that the stator diameter of the motor can be greatly reduced. Due to the low permeability of permanent magnet materials, the armature reaction decreases and the mutual inductance increases. Series excitation, parallel excitation, separate excitation and permanent magnet DC motors are currently used in electric vehicles. However, the main problem of DC motor is that due to the commutator and brush, its reliability is reduced and needs regular maintenance.

The rapid development of science and technology has brought a leap in power semiconductor technology. The successful development of switching transistor has brought vitality to the creation of a new type of DC motor – brushless DC motor. In 1955, American Harrison first put forward the idea of replacing motor brush contact with transistor commutation line, which is the dimension of Brushless DC motor. It is composed of power amplification part, signal detection part, magnetic pole body and transistor switching circuit. Its working principle is that when the rotor rotates, periodic signal electromotive force is induced in the signal winding, which makes the transistors turn on in turn to realize commutation. Firstly, when the rotor does not rotate, the induced electromotive force cannot be generated in the signal winding, the transistor is not biased, and the power winding cannot be fed, so this brushless DC motor has no starting torque; Secondly, because the leading edge steepness of the signal electromotive force is small, the power consumption of the transistor is large. In order to overcome these disadvantages, people use the commutator of centrifugal device or place auxiliary magnetic steel on the stator to ensure the reliable start of the motor. However, the former has a complex structure, while the latter requires additional starting pulses. Then, after repeated tests and continuous practice, people finally found a mechanical commutation device that uses position sensor and electronic commutation circuit to replace brush DC motor, which opened up a new way for the development of DC motor. In the early 1960s, proximity switch position sensors, electromagnetic resonance position sensors and high-frequency coupling position sensors came out one after another, followed by magnetoelectric coupling and photoelectric position sensors. With the rapid development of semiconductor technology, people are interested in the Hall effect discovered by American hall in 1879. After years of efforts, a brushless DC machine with the help of Hall element (Hall effect rotor position sensor) to realize commutation was successfully trial produced in 1962. In the early 1970s, a brushless DC motor was successfully developed to realize phase commutation with the help of a magnetic sensitive diode with a sensitivity of about 1000 times higher than that of Hall element. While developing various types of position sensors, people try to find a brushless DC motor without additional position sensor structure. Using permanent magnet material to replace the excitation winding of traditional synchronous motor, permanent magnet synchronous motor can remove the copper loss of traditional brush, slip ring and excitation winding. Permanent magnet synchronous motor is also called permanent magnet brushless AC motor or sinusoidal permanent magnet brushless motor because it adopts sinusoidal AC and brushless structure. Since these motors are essentially synchronous motors, they can be operated by sinusoidal alternating current or pulse width modulation without electronic conversion. When the permanent magnet is embedded on the surface of the rotor, because the permeability of the permanent magnet material is similar to that of air, the operating characteristics of this motor are the same as those of non salient pole synchronous motor. If the permanent magnet is embedded in the magnetic circuit of the rotor, the salient pole will produce additional magnetic pole torque, so that the constant power area of the motor has a wider speed range. If the salient pole of the rotor is intentionally used and the excitation winding or permanent magnet is removed, the synchronous reluctance motor can be obtained. Its structure is simple, the cost is low, but the output power is relatively low. Like induction motor, permanent magnet synchronous motor usually adopts appropriate control methods to meet the high-performance requirements of electric vehicle motor drive.

It should be noted that the term “DC” in the name may be misleading because it does not refer to DC motors. In fact, this kind of motor uses AC square wave power supply, so it is also called permanent magnet brushless square wave motor. The most obvious advantage of this kind of motor is to remove the brush, which also eliminates many problems caused by the brush; Another advantage is that it can produce large torque because its square wave current is perpendicular to the magnetic field. Moreover, this brushless structure makes the armature winding a more representative area. Due to the improvement of heat conduction through the whole structure, the increase of electrical load can produce higher power density. Different from permanent magnet synchronous motor, this kind of permanent magnet brushless DC motor is usually equipped with shaft position sensor. Recently, a decoupling permanent magnet brushless DC motor for electric vehicles has been developed. It has high power density, uninterrupted torque and good dynamic performance. It also adopts advanced induction angle control method to effectively increase its constant power speed range.

In 1970, the stepping motor research group of Leeds University in the UK initiated the prototype of switched re reluctance motor (SRM), which is the earliest research on switched reluctance motor. In 1972, the low-power motor with semiconductor switch (10W ~ 1kW) was further studied. Substantial progress was made in 1975, and it has been developed to provide devices for 50KW battery cars. In 1980, switched reluctance motor drive Co., Ltd. (srdltd.) was established in the UK, Specialized in the research, development and design of SRD system. 1983 UK (srdld.) Firstly, SRD series products are launched, which is named outlon.

TASC drive systems also launched their products in 1984. In addition, srdltd A driving system suitable for tram has been developed, which has been running for 500 km by 1986. The emergence of this product has caused great repercussions in the field of electrical transmission. It has reached an unexpectedly high level in many performance indexes, and the comprehensive performance and price indexes of the whole system have reached or exceeded some variable speed transmission systems widely used in industry for a long time.