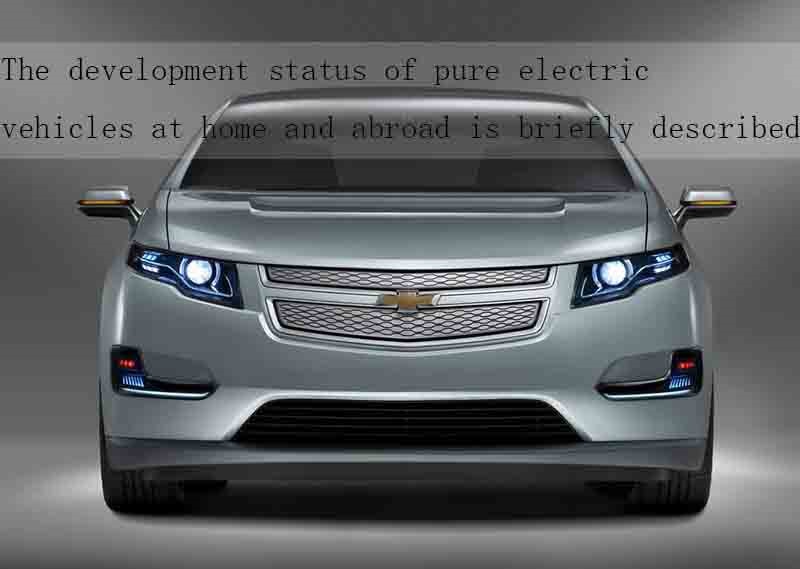 For example, the hy wire model developed by general motors of the United States, called hydrodynamics 3, generates electricity from a battery pack composed of 200 fuel cell blocks connected in series, and provides hydrogen to the fuel cell pack through a 68l hydrogen storage tank. After the electric energy generated by the battery pack is input into the motor, the vehicle is driven by a three-phase asynchronous motor with a power of 60kW, and almost no noise is generated. There are two kinds of hydrogen storage tanks: one is liquid hydrogen with a temperature of – 253 ℃; The other tank stores high-pressure hydrogen with a maximum pressure of 700pa. The driving mileage of one-time inflation can reach 400km and 270km respectively.

The following figure shows the volt electric vehicle of GM Chevrolet. The Chevrolet Volt concept car was unveiled at the North American International Auto Show held in Detroit in January 2007. The Chevrolet Volt Electric concept car can be regarded as an all-round environmental protection concept car – “the only model that can be compatible with many new energy technology solutions that bring competitive advantages to GM”. It is called “all-round” because the E-Flex system is a very flexible electric vehicle

The automotive architecture perfectly solves the global adaptability of automotive energy. The Chevrolet Volt concept vehicle is equipped with GM’s latest and most efficient hydrogen fuel cell system for the first time, which fully reflects GM’s unremitting efforts in the process of zero emission and energy diversification. This Chevrolet Volt concept car is equipped with the latest generation of GM’s power propulsion system, E-Flex system (“E-Flex” system is the name of GM’s next-generation electric propulsion system. In which “e” stands for “electricity”, which is the only driving mode of E-Flex models. While “flex” stands for “flexibility”, which means that the power used to drive the car can be obtained from various ways), so that we can get from gasoline, ethanol Electricity can be obtained from biodiesel or hydrogen, which allows us to customize the propulsion system to meet special requirements and market-specific infrastructure.

In September 1996, Toyota Motor Corporation of Japan developed rav4-ev pure electric vehicle prototype, and launched its modified vehicle in October 1997. The car is a practical EV with “zero pollution” and low maintenance, which has been sold in batch in the United States. The shape and structure are shown in the figure below.

According to the Interim Measures for the administration of financial subsidies for the demonstration and promotion of energy-saving and new energy vehicles jointly issued by the Ministry of Finance and the Ministry of science and technology in February 2009, the models included in the catalogue of recommended models for the demonstration, promotion and application project of energy-saving and new energy vehicles will enjoy financial subsidies according to the following standards: for passenger vehicles and light commercial vehicles, hybrid vehicles are divided into five gears according to the degree of mixing and fuel economy, The maximum subsidy is 50000 yuan per vehicle; Subsidy of 60000 yuan for each pure electric vehicle; 250000 yuan for each fuel cell vehicle; For urban buses and hybrid buses with a length of more than 10m, 50000-420000 yuan will be subsidized for each, and 500000 yuan and 600000 yuan for pure electric and fuel cell buses respectively.

The list of cities participating in the “ten cities and thousands of vehicles” plan has increased to 13, namely Beijing, Shanghai, Chongqing, Changchun, Dalian, Hangzhou, Jinan, Wuhan, Shenzhen, Hefei, Changsha, Kunming and Nanchang. The local finance of the 13 cities participating in the demonstration should also arrange supporting funds to give appropriate subsidies to the relevant expenses such as the purchase of energy-saving and new energy vehicles, the construction and maintenance of supporting facilities. Four commercial vehicles and one passenger vehicle are recommended for the first batch of energy-saving and new energy vehicle demonstration, promotion and application projects determined in August 2009, and a total of five models are selected as follows:

Shenzhen: 101 hybrid buses were put into operation. In 2009, 101 hybrid buses have been put into use in Shenzhen. According to the implementation plan for the demonstration and promotion of energy-saving and new energy vehicles in Shenzhen, by 2012, a total of 2.4 million new energy vehicles will be demonstrated and promoted in the three key areas of public transport, official business and private cars in Shenzhen Ten thousand. The municipal government has invested more than RMB 2 billion in the promotion of new cars and included it in the demonstration scheme of Shenzhen.

Dalian: invest 77 new energy buses. In 2010, 92 hybrid buses and 15 pure electric buses have been put into use in Dalian. According to the plan, Dalian will realize more than 2400 vehicles by 2012.

Chongqing: the new energy vehicle industry alliance was established. Chongqing will promote 1150 demonstration vehicles by the end of 2011, and the specific composition is referred to as “3721”. 3. Promotion of 300 official vehicles; 7. Promote 700 taxis; 2. Demonstration of 2 bus lines and 50 buses; 1, i.e. 100 private cars, and establish a Chongqing new energy vehicle industrialization base.