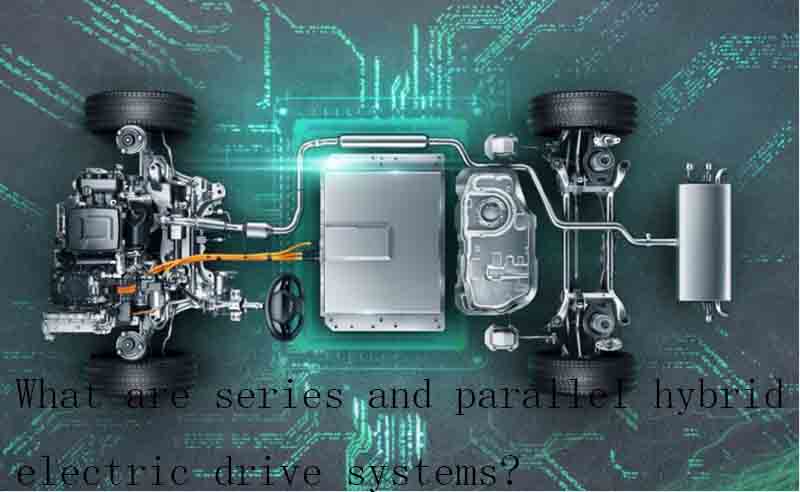 (1) Pure electric mode: the engine is off, and the vehicle is only powered and driven by the battery pack.

(2) Pure engine mode: the traction power of the vehicle only comes from the engine generator set, while the battery pack neither supplies power nor absorbs any power from the drive system. The electrical equipment group is used as an electric power train from the engine to the driving wheel.

(5) Regenerative braking mode: the engine generator set is shut down, while the traction motor operates like a generator, and the generated electric power is used to charge the battery pack.

(7) Hybrid battery charging mode: the traction motor with engine generator combination running in the generator state, both of which charge the battery pack.

The series hybrid electric drive system has the following advantages.

(1) When the engine is disconnected from the driving wheel, the engine is a full mechanical component. Therefore, it can run at any operating point on its speed torque characteristic diagram, and may completely run in its maximum efficiency area. The optimization in this narrow area can significantly improve the engine performance. In addition, the mechanical decoupling of the engine from the driving wheel enables the application of high-speed engine, but it will make it difficult to drive the wheel directly through mechanical connection. For example, gas turbine engine or power machinery with slow dynamic characteristics (such as Stirling engine).

(2) Because the motor has almost ideal torque speed characteristics, it does not need multi gear transmission settings. Therefore, its structure is greatly simplified and the cost is reduced. In addition, instead of the application of one motor and one differential, two motors can drive one wheel respectively. This is just like the differential, which not only forms the speed decoupling between two wheels, but also plays the role of limiting slip differential for traction control. The final improvement will be the use of four motors, so that it can be made into a cheap and simple differential group to realize the vehicle with all wheel drive, and the drive shaft operates with the help of the beam of the vehicle.

(3) Due to the mechanical decoupling provided by the electric drive train, a simple control strategy can be applied.

However, the series hybrid electric drive system has the following disadvantages.

(3) Because the traction motor is the only power machine driving the vehicle, it must be customized to meet the maximum operating performance requirements.

Simultaneous interpreting, like traditional internal combustion engines, the parallel hybrid electric drive system is a drive system powered by an engine to the wheel, which is assisted by a motor coordinated with the transmission mechanism and provides power through mechanical coupling.

Mechanical coupling can couple torque or speed. Torque coupling is to add the torque of engine and motor together, or decompose the engine torque into two parts: driving and battery charging respectively. Mechanical component coupling scheme with two input torques: one of its inputs comes from the engine; The other input comes from the motor. The mechanical torque coupling output is connected to the mathematical drive.

Torque and speed output can be expressed as

In the actual hybrid electric drive system design, the maximum traction force associated with the transmission configuration can meet the requirements of vehicle climbing performance. Due to the limitation of the adhesion between the tire and the ground, greater traction force is not required. When the single gear transmission device is applied, the inherent advantages of the high torque characteristics of the motor at low speed are used.

In the structure of rear transmission device, when the motor torque is directly transmitted to the driving wheel, the transmission device can only improve the engine torque. This structure can be used in the electric drive system of large motor with large constant power area. The transmission device is only used to change the operating point of the engine to improve the vehicle performance and the operating efficiency of the generator. It should be noted that when the vehicle is stopped and the motor is fixedly connected to the driving wheel, it is impossible for the battery pack to be charged by the engine by driving the motor as the engine.

The two transmission devices applied to engine and motor can adopt single gear transmission device or multi gear transmission device. This structure has traction characteristics. The construction of the separation shaft provides the advantages of some traditional vehicles. It keeps the original engine and transmission unchanged, and adds an electric traction system to the other shaft. It also has a four-wheel drive type, which optimizes the traction on smooth roads and reduces the traction acting on individual tires. However, the electrical equipment and the end differential gear train occupy considerable space, resulting in reduced effective passenger and luggage loading space. If the transmission is a single gear motor. This problem can be solved by replacing the motor with two small-size motors in the two driving wheels. It should be noted that the battery pack cannot be charged by the engine when the vehicle is stopped.

The power from the two power units can be related to each other through their speed coupling, as shown in Figure 5-11. The characteristics of speed coupling can be described as

Where K1 and K2 are constants associated with the actual design.