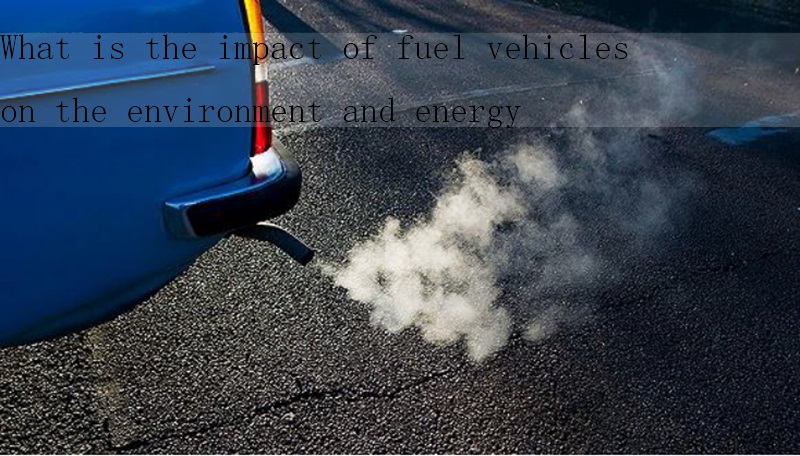 1、 Impact of automobile on Environment

In recent years, due to the rapid rise of the Asian automobile industry, the annual output of global automobiles has increased year by year. In 2011, the total output of global automobiles exceeded 80 million, and the global automobile ownership exceeded 1 billion by August 2011. However, with the rapid development of automobile, it has brought many adverse effects on the natural environment, human environment and human survival and health. At present, internal combustion engine vehicles still account for the vast majority of the automobile market at home and abroad. Automobile engines burn fuel to generate power and emit exhaust gas at the same time. The main components of tail gas are carbon dioxide (CO2), carbon monoxide (CO), nitrogen oxides (NOx) and hydrocarbons (HC), as well as pollutants such as lead dust and soot and some solid fine particles.

With the development of automobile industry, the total amount of carbon dioxide emissions in the world and China has increased year by year, and the problem of world carbon emissions has become increasingly prominent. In 2009, the total amount of world carbon dioxide emissions reached 30.06 billion tons. Among them, according to the statistics of the International Energy Agency in 2007, 23% of the global carbon dioxide comes from transportation. It can be seen that the automobile industry is an important factor affecting carbon emissions.

Carbon monoxide, hydrocarbons, nitrogen oxides and particles in automobile exhaust will have direct harm to human health. The combination of carbon monoxide and hemoglobin in the blood is 250 times faster than oxygen, which weakens the function of blood to deliver oxygen to various tissues, endangers the central nervous system, and causes functional obstacles such as human feeling, reaction, understanding and memory. In severe cases, it endangers the blood circulation system and leads to life danger.

Nitrogen oxides and hydrocarbons produce a kind of irritating chemical smoke under the action of solar ultraviolet rays. The most prominent harm to human body is to stimulate the eye and upper respiratory membrane. The composition of particulate matter in tail gas is very complex and has strong adsorption capacity. It can adsorb all kinds of metal dust, strong carcinogens and pathogenic microorganisms. Particles enter the human body with breathing, which will cause respiratory diseases and malignant tumors.

In addition to the adverse impact of automobile exhaust on the environment, automobiles will cause environmental pollution in the process of production, use and scrapping. In the process of automobile manufacturing, freon used in plastic parts destroys the ozone layer, lead based coatings will cause lead pollution, and the escape of paint solvent will also cause pollution. The primary pollutants such as hydrocarbons and nitrogen oxides discharged into the atmosphere by vehicles react chemically under the action of sunlight to generate secondary pollutants such as ozone, aldehyde, ketone, acid, peroxyethylphthalein and nitric acid. The mixture of primary pollutants and secondary pollutants involved in the photochemical reaction process forms photochemical smoke, which is harmful to health.

The construction of roads, parking lots and gas stations occupies a large amount of cultivated land, destroys vegetation, causes soil erosion and endangers wildlife. A large amount of solid waste, waste water and waste oil will be produced in the process of automobile scrapping, which will pollute the surrounding environment and groundwater resources.

To sum up, in view of the serious negative effects on the environment caused by the rapid development of the automobile industry, it is urgent to pay attention to economic development and improve the awareness of energy conservation and environmental protection, and promote new energy vehicles in a timely and appropriate manner.

2、 Impact of automobile on energy

The traditional automobile industry takes oil as fuel and has a huge demand and dependence on fossil energy. In recent years, the process of China’s automobile socialization has accelerated, and the automobile industry has ushered in a period of leapfrog vigorous development. However, the negative impact of the rapid growth of automobile production on energy is becoming more and more prominent.

With the development of the automobile industry, China’s dependence on oil imports has risen year after year. In 2008, it exceeded 50% to reach 199.85 million tons. In 2010, China imported 239 million tons of crude oil, and its external dependence reached 53.8%. During the 12th Five Year Plan period, China’s oil demand will further increase, and its external dependence on oil is likely to exceed 60% or even higher. The share of China’s crude oil consumption in the world’s total crude oil consumption increased from 3.5% in 1990 to 10.6% in 2010, and the share of crude oil imports in the world’s total imports increased from 0.2% in 1990 to 5.1% in 2010. In terms of total oil consumption, China has become a major oil consumer after the United States.

In 2008, the oil price has exceeded 140 US dollars / barrel. Vigorously reduce the dependence on oil imports, reduce the dependence of the national economy on oil, and alleviate the huge pressure on the market caused by high price oil, so that the research of various alternative energy sources is imperative.

In recent years, China’s automobile industry has developed rapidly and has become the largest automobile market in the world. In 2010 and 2011, the annual output and sales volume exceeded 18 million for two consecutive years, continuing to remain the first in the world, and the annual oil consumption reached 439 million tons. At present, China’s per capita GDP has exceeded 3000 US dollars. The upgrading of consumption structure is an inevitable trend. In addition, the country is in an important stage of industrialization and urbanization, and the rapid growth of automobile demand is inevitable. By the end of June 2011, China had more than 85 million cars (excluding three wheeled vehicles and low-speed trucks). Some analysts believe that China’s car ownership may reach 175 million by 2020. According to the calculation of the annual fuel consumption of 2.14 t per vehicle in 2009, the fuel consumption of vehicles will reach 375 million T in 2020. According to the oil production rate of 80%, the automobile oil in 2020 is equivalent to the total oil consumption of China in 2010. The contradiction between automobile and oil consumption has become increasingly prominent.

Secondly, China’s sustainable development depends on the sustainable development of energy and the development of new energy. For a long time, China’s industry has shown an extensive economic growth mode, and the utilization efficiency of energy resources is low. In dollar terms, China’s energy consumption per 10000 US dollars of GDP is three times that of the United States, five times that of Germany and nearly six times that of Japan. Data show that the efficiency of 1t coal production in China is only 28.6% of that in the United States, 16.8% in the European Union and 10.3% in Japan. The unit energy consumption of 33 major products in China is 46% higher than the international average. China’s energy efficiency is 20 years behind that of developed countries, with a difference of 10% ~ 20%. China’s energy demand is still growing rapidly and continuously. The shortage and limitation of traditional energy highlights the necessity and urgency of new energy development. Pure electric vehicles and fuel cell vehicles can achieve zero emissions in the process of vehicle use and completely get rid of their dependence on oil resources, which will become the ultimate goal of China’s development of new energy vehicles.

Moreover, China’s automobile industry has developed rapidly in recent years. China has become one of the regions with the largest development potential of the automobile industry in the world, and China’s automobile industry will still maintain a rapid growth momentum for a long time in the future. In the face of the substantial increase of greenhouse gas emissions, the increasingly serious energy problem and the increasing environmental pollution, it is particularly important to choose and develop energy-saving and environmental protection vehicles represented by new energy vehicles.

In this context, China’s development of new energy vehicles is not only conducive to reducing dependence on oil and ensuring China’s energy security, but also conducive to China’s environmental protection and sustainable development, and provides important strategic opportunities for China’s automobile industry to achieve leapfrog development.

Overview of new energy vehicles Tags:The impact of cars on the environment